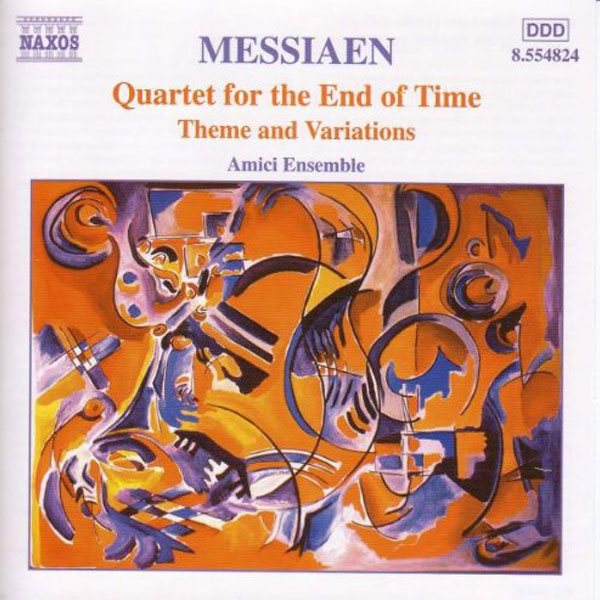 Olivier Messiaen was one of the most original and profound composers of the twentieth century. Born in Avignon in 1908, he studied organ and composition in Paris, and became a professor at the Paris Conservatoire in 1942. Messiaen's musical excellence extended beyond composition into the areas of performance and education: he was a brilliant organist who held a post at the Church de la Sainte Trinité in Paris for almost fifty years, and a highly influential teacher who taught many of the leading composers of the post-war generation. His compositional style is characterized by a complete integration of emotional expressiveness, deeply religious devotion, and a highly organized means of intellectual control. Despite their complexity his works have attracted favourable attention everywhere and inevitably invoke a deep emotional response from the listener.
/

The Thème et variations was composed in Paris in 1932 for Messiaen’s first wife, the violinist and composer Claire Delbos. The chamber music setting for violin and piano and his use of the classical theme and variations form are both unusual in Messiaen’s output. Although based on convention, it is one of the most significant of his early works and representative of the compositional techniques he had developed at this point in his career. The theme is tender and lyrical, consisting of a floating melody in the violin supported by chords in the piano. The first three of five variations move at increasingly quicker speeds, while the fourth builds up to what is simultaneously a fifth variation and a restatement of the theme, now an octave higher and accompanied by fuller chords in the piano. One of Messiaen’s pupils, the composer and conductor Pierre Boulez, recalled an almost chance hearing of the Thème et variations and its impact early in his career: “It was enough to inspire me with an immediate wish to study with him. I felt the force of his attraction immediately, as I say, at a single hearing.”

Artist
Amici Chamber Ensemble
Release Date
June 6, 2001
Label
Naxos
Buy it on iTunes
Buy it on Amazon
Messiaen wrote the Quartet for the End of Time while he was a German prisoner-of-war in Silesia in 1940-42. He had managed to keep with him some music paper, and the act of composition provided him with a means of sustaining his psychological well-being. The unusual instrumentation of the quartet was determined by the fact that among his fellow prisoners were three musicians, a violinist and a clarinettist who had managed to keep their instruments, and a cellist whom the Germans eventually provided with an instrument, albeit with one string missing. Messiaen wrote the piano part for himself although there was no piano available at the time. Finally, after the work had been completed, an upright piano - sadly out of tune and with many keys that stuck - was brought into camp. The first performance was given in the Stalag VIII A on 15th January, 1941 in atrociously cold weather. The audience included five thousand prisoners from all levels of society: priests, doctors, shop-keepers, professional soldiers, workers, peasants. "Never", Messiaen later recalled, "have I been heard with as much attention and understanding." Following the quotation from the Book of Revelations, chapter X, verses 1 to 7, on which the quartet is based, is the composer's description of the music: "And I saw another mighty angel come down from heaven, clothed in a cloud: and a rainbow was upon his head, and his face was as it were the sun, and his feet as pillars of fire. He set his right foot upon the sea and his left foot on the earth, and, standing upon the sea and upon the earth lifted up his hand to heaven and swore by Him that liveth for ever and ever, saying: 'There shall be Time no longer: but on the day of the trumpet of the seventh angel, the mystery of God shall be finished."'