Amici is thrilled to be joined by virtuoso violinist, Ilya Kaler in Mother Russia, Rebels + Exiles 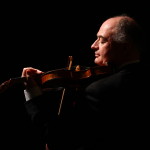 Described by the Gramophone as the “magician, bewitching our ears” for his hauntingly beautiful sound, flawless command of the instrument and mesmerizing phrasing, Ilya Kaler is the world’s only Gold Medal winner at the three most prestigious international violin competitions: the Tchaikovsky Competition in Moscow (1986), the Sibelius Competition in Helsinki (1985), and the Paganini Competition in Genoa (1981).  Kaler is considered to be one of the most outstanding personalities of the violin today, whose career ranges from that of a soloist and recording artist to chamber musician and professor.

Ilya Kaler generously gave us some of his time to tell us his thoughts on Mother Russia, Rebels + Exiles

Q: Rimsky-Korsokov, Arensky’s teacher, said of him that he would “soon be forgotten.” What do you think it is about Arensky’s music that still resonates with us today?

A: Well, it’s funny, the reputation of composers definitely go up and down. The music of Arensky, his style was very typical of that era: late romantic style with certain features of early romanticism also. His choice of D minor key for the Trio definitely refers to Mendelssohn Trio in D minor, which he liked and knew very well, ofcourse. The piece was already very popular, played by all chamber groups. But, Arensky was also under a huge influence of Tchaikovsky. Arensky was characterized by some of his contemporaries as ‘eclectic,’ in the sense that they felt he didn’t have a strong enough personal voice as a composer. He reminded everybody of somebody else, which doesn’t mean ofcourse that there was anything wrong with his music or it was not of the finest quality. I think today, first of all, we live at a time where we almost play everything, [chuckles] almost, that was written in the 19th and 20th Century. And so it is only natural to have interest in pieces that were forgotten for some time, or were not popular, to bring them back. In that sense, Arensky is still a minor figure in Russian music. He’s not of the skill of Tchaikovsky or Rimsky-Korsokov or Rachmaninoff, definitely. Not only in terms of his output, I mean, he died quite early, and did not write too much music, really. What he wrote is really very fine, his chamber works and some of his choral works. But, I agree with them. His music can be easily mistaken for somebody else’s. It has melodic and harmonic features of other greater composers. Huge influence of Tchaikovsky, I think. Much more so than Rimsky-Korsokov. Of course, Rimsky Korsokov wrote quite an impressive output of instrumental music, but was mostly an operatic composer, and this is how he is remembered, really. He was right and he was wrong at the same time, I would say. People who forget the name Arensky… his name doesn’t stand in the pantheon of immortals, but this is a really lovely piece, and wonderful. One that’s rewarding to perform and listen. Easy to listen.
Q: Are there elements of Arensky’s Trio that seem quintessentially Russian?

A: Quintessentially Russian? There are some melodic elements, but generally it’s a European work. A western European work. So, the idea of Russian music is very difficult to pin down, really. It was a time of musical nationalism, with composers who were inspired by their national heritage, musical heritage, folk melodies, dances, religious music and I think that also it’s present, for example, in his string quartet for two violins, viola and cello. There’s a quotation of some Russian Orthodox church music there, so you could really hear that. In this particular piece I don’t think there’s anything specifically Russian except some twists and turns of phrases that can be identified and connected with Russian musical forms. But it’s very much already developed and made it sound as a European piece. The structure is very European. Very western European.

Q: In your opinion, what is the most important unifying factor of these pieces beyond their nationality?

A: It’s difficult to find a unifying factor, except geography of course. All composers, including the ones I do not perform on this program, come from Russia. But, they are very different personalities. Arensky and Rachmaninoff can be referred to each other as close figures, not only because Rachmaninoff studied with him but because there are certain elements unifying them, in that both of them were under the influence of Tchaikovsky. Rachmaninoff, by the way, was not a big fan of Rimsky-Korsokov. It was a different camp you might say, in Russian music at that time. Rimsky-Korsokov belonged to the so called, “mighty bunch,” you know, they were Russian nationalist composers who tried to build a regional form. But eventually they used musical folklore and wrote operas because they thought that symphonies and sonatas and chamber music genres are not authentic for Russian music, that they imported them from Europe, so they had to develop something else. But eventually because it’s still instrumental music, they had a national color, but the form and structure and obviously the instruments were still western European. Anyways, as far as Ustvolskaya, it’s a completely different world, definitely. Ustvolskaya was a maverick composer, she studied with Shostakovich. She was under a great influence from Shostakovich, although later she denied it. They were very close personally. She developed her own unique style, which sounds sometime like avant-garde, but in fact the Soviets for some strange reason did not perceive it that way. She was not marketed as one of the leading composers. The Soviet Union didn’t give much support from the official line but she was really, how should i say …suppressed. Her pieces were performed quite rarely partially because of very forbidding language, which is very difficult to formulate and describe really, you have to experience it. Over the last ten or twelve years there’s a growing interest for her work. In Holland for instance and some other European countries, I’ve heard her chamber pieces performed and her symphonies. One of her symphonies is short, it’s like four minutes, but it’s called symphony. The Russian element of her music I would say, is her connection with the religious tradition, I think. The way she understood, the way she heard. Very ritualistic sense and very strange sound world which doesn’t really resemble anything that we know. I would say the clarinet trio is one of the easier perceivable and listenable pieces, because it definitely has melodic lines, it has a clear rhythmic structure, although it evokes a very kind of sinister, ominous, eerie atmosphere. The finale ends very strange with this bell tolling in the piano. Very bare texture. These instruments very rarely play together. The clarinet sounds very lonely with the piano and violin. So it is very rare the instruments play together, there are only a few sections. I would say this piece has very little connection with Arensky and Rachmaninoff. [laughs] Definitely none.

Q: Each composer on the program has a very individual style and sound. How do you navigate that as a performer? Do you have techniques for switching sound worlds?

A: Well you don’t really need to switch because the music speaks for itself in the way it is written. Ustvolskaya is written in such a way that the personal imprint of the performer is really of no relevance. You must execute this piece as precisely as it’s written and it really works perfectly. Whereas in Romantic pieces, of course, you were expected to have your personal approach to this music, although they also marked very precisely. But there are all kinds of things that you can, and are expected to do with musical timing, with shaping of the phrases, with rubato and so forth. There are all kinds of expressive devices, especially in string instruments, that you could apply. Romantic music always treated string instruments as human voices. These are very lavish melodies which are very rewarding for violin and for cello definitely both the Arensky and Rachmaninoff pieces are very close that way. Rachmaninoff [Trio] is a very early piece. He was just nineteen years old. But the piece can already be felt in that way.

On Mother Russia, Rebels + Exiles you will hear Anton Arenky’s Piano Trio in D minor. Click here to listen to a recording produced in 1894 of Arensky himself playing the work!