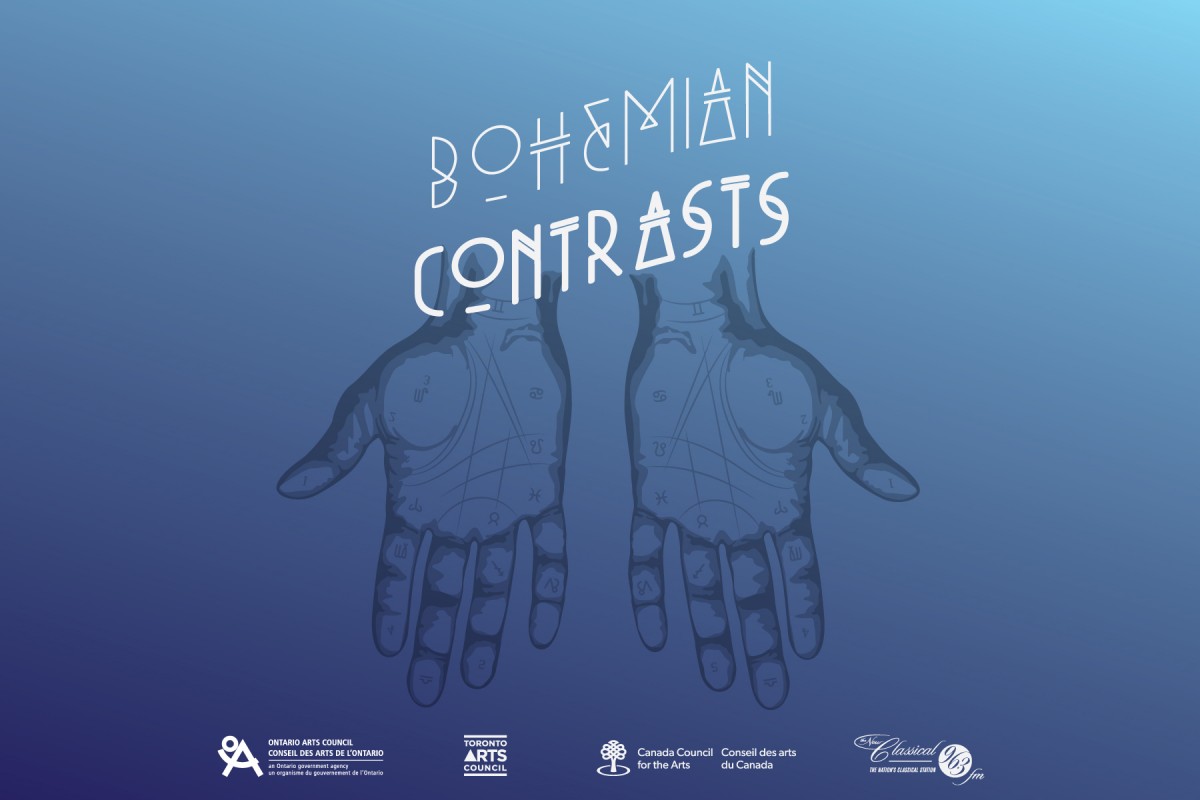 [Bohemian Contrast’s] programme combines music by romantic titans with works by less familiar composers. The common link is Central European roots and influence, with an emphasis on Bohemia. “Amici Chamber Ensemble has long been fascinated by composers who are off the beaten path, especially when they have common interests and even ethnic backgrounds with the ‘great’ composers,” says David Hetherington. “Janáček and Schulhoff are first rate composers whose music is not performed that often. In this programme exploring Bohemian influence, we can hear how well their music complements Brahms and Liszt.  This programme also gives us an opportunity to perform with our good friends in the New Orford String Quartet.”

Janáček is not the first name that comes to mind in thinking about the virtuoso keyboard repertoire. The foremost Czech composer of the generation after Dvořák, Janáček personally valued his operas most highly. Nevertheless, instrumental compositions established his reputation.  He was approaching 50 when he began On an Overgrown Path. Ironically, it is considered relatively early, because Janáček’s gifts flowered so richly in his later years.

These piano pieces coincide with an artistic turning point: the opera Jenůfa (1904). It was the first major work in which Janáček delved into the rhythms and inflections of the Czech language. He once said, “When anyone speaks to me, I listen more to the tonal modulations in his voice than to what he is actually saying.” After  Jenůfa, asymmetry began to dominate his rhythms, and he constructed all his music from simple melodic motives. In On an Overgrown Path, entire movements evolve from a single gesture.

The cycle is also an example of autobiographical works that became increasingly important in Janáček’s music. The title refers to the countryside around Hukvaldy, Janáček’s Moravian home town. He later commented that he was “walking along an overgrown path of old memories.” These glimpses of childhood are in the 19th-century tradition of character pieces. The complete collection comprises two volumes. The first group of ten was published in 1911 as Small Compositions for Piano. Poetic titles were added afterward. The remaining five pieces appeared posthumously, in  1942, and without programmatic titles.

Some of Janáček’s pieces initially appeared in 1901 and 1902 as part of a periodical collection for harmonium called Slavic Melodies. Harmonium is a keyboard instrument related to the organ, powered by pedal-operated bellows.  Music for harmonium was fashionable in Moravia at the turn of the 20th century. That accounts, in part, for Janáček’s unusual approach to the piano.

In 1903, Janáček’s beloved daughter Olga succumbed to typhoid fever at age 21. Her death was the pivotal emotional event of his middle age. The last three movements of Overgrown Path, including No.8, V Pláči [‘In Tears’], are his responses to her passing. He described the movement as “A foreboding of certain death . . . an angelic being lay in deathly anguish through hot summer nights.” The wistful theme is reminiscent of Grieg’s Lyric Pieces.

Frýdecká panna Maria [‘The Madonna of Frydek’] refers to a church in the town of Frydek, in Silesian Moravia on the Polish border (today it is Frýdek-Místek, twin cities bisected by the Ostravice River). Janáček sought to evoke religious processions and the meditations of pilgrims in church. Chorale-like chords suggest the organ and the reverent occasion. The chordal passages alternate with a melody above an oscillating tremolo accompaniment that emulates cimbalom, a hammer dulcimer common to Gypsy and popular Eastern European music. He used the same melody in an Ave Maria shortly after composing this movement.

Czech-born Erwin Schulhoff was a protégé of Dvořák and a student of Reger and Debussy.  Despite the fact that his name and music are new to most of us this afternoon, his music was widely performed throughout Europe in the 1920s and ’30s

When World War I erupted in 1914, Schulhoff was conscripted into the Austrian army and  served for four years. The experience disillusioned him, shifting his political sympathies to socialism (he later joined the Communist Party).  Whereas his early compositions adopted a post-romantic idiom, he now embraced atonality, an Expressionist aesthetic, and the Second Viennese School. Such was his focus when he began work on the String Sextet in 1920.

Two months after the Armistice that ended the war, Schulhoff had moved to Dresden to live with his sister. Over the next four years in Germany, he encountered Dadaism and jazz, both of which would influence his later music. After completing the Sextet’s first movement in April1920, he set it aside in favor of other projects.

Returning to Prague in 1923, Schulhoff became fascinated by Janáček’s music and philosophy. His study of Janáček awakened an interest in Slavonic folk song and, eventually, neoclassicism. When he returned to the Sextet, his entire approach to composition had changed.

Thus one would expect a jarring stylistic shift between the opening Allegro risoluto and the balance of the work; however, Schulhoff is skillful in maintaining continuity. The Sextet explodes in expressionist fury at the outset. Structurally, the Allegro risoluto is ternary, with an uneasy central interlude that barely relieves the tension. Jagged edges and violent gestures in the opening and closing paragraphs make the biggest impression. At the close, subtle dissonance disturbs the clarity of open fifths.

By starting the second movement on the same pitches that the Allegro risoluto ends, Schulhoff gives the listener a sense of natural outgrowth. Tranquillo is a spooky mood piece that shows how well he knew how to exploit the special effects possible on string instruments. His return to tonality is evident; repeating accompaniment patterns, pedal points, and sighing figures contribute to the hypnotic effect.

Burlesca, which functions as a scherzo, shows the most overt Slavic elements in the Sextet. The iregular meter (5/8) and occasionally percussive string techniques are reminiscent of Bartók, while the sardonic character calls Prokofiev to mind. Pedal points on C link it to the two preceding movements.

An elegiac cello line introduces the mournful Molto adagio, growing from a three-note motive from the first movement; the solo cello recurs periodically throughout the finale. An oscillating pedal point on the low C-to-G open fifth helps thread Schulhoff’s Sextet together with admirable cohesion.

When the Nazis occupied Czechoslovakia in 1939, Schulhoff had no way to support himself. His Jewish heritage and Communist affiliation were more than enough to mandate his arrest in 1941. He died the following year in the German concentration camp at Wülzburg, Bavaria, probably of tuberculosis. The finale to his Sextet seems to be a premonition of his fate.

Liszt was Hungary’s first internationally renowned composer.  He catapulted to fame as a virtuoso pianist, possibly the greatest the world has ever known.  His solo piano compositions are primarily display pieces for strength and technique. They do afford plenty of opportunity for good musicianship, and they memorialize his bravura playing style.

Liszt left Hungary young, to be educated in Vienna and Paris.  He returned to his native land in 1839 in triumph, as a touring virtuoso. German was his mother tongue. He knew little Hungarian, and set about reacquainting himself with Hungary and its culture.  Between 1840 and 1847 he published two sets of pieces based on Hungarian themes under the titles Magyar Dallok and Magyar Rhapsodiak.  (The term “rhapsody” did not then exist in music; Liszt is credited with being the first to use it.)  Although these works were revised extensively in subsequent years, they are the origins of the collection we know as the Hungarian Rhapsodies.

Ironically, little of their music is actually Hungarian.  Like the rest of his generation, Liszt mistakenly confused Gypsy music with ethnic Hungarian music.  In 1839, Hungary’s urban centers were part of the Austrian  Habsburg empire.  Consequently, Austro-German taste prevailed.  Authentic Hungarian folk songs and dance music survived in remote rural areas, remaining isolated there until Béla Bartók and Zoltan Kodály conducted their landmark ethnomusicological research in the early 20th century.  Liszt was hardly alone in his misconception.  Haydn, Beethoven, Schubert, and Brahms all adapted Gypsy elements into their music, labeling it “all’ongarese” [in the Hungarian style].

What distinguishes Liszt’s Hungarian Rhapsodies is their emulation of specific sounds in the Gypsy band.  He was delighted by the sounds of the cimbalom and the rhapsodic violin style, imitating both in his piano texture.  He based his harmonies on the augmented Gypsy scale, and incorporated characteristic syncopations and the inaptly-named “Scotch snap” (a dotted rhythm with the short note followed by the longer note) into his own Rhapsodies.  The Twelfth is one of those that he later orchestrated, which has added to its familiarity.  Like the other Hungarian Rhapsodies, it is important for its expansion of keyboard technique, admirably imitating the sounds of the Gypsy band in a quasi-orchestral extravaganza that is quite remarkable on solo piano.

Quintet in B minor for Clarinet & Strings, Op.115

During a visit to Meiningen in March 1891, 58-year-old Johannes Brahms heard the Duke of Meiningen’s orchestra perform several concerts.  One included a Weber Clarinet Concerto, another Mozart’s Clarinet Quintet in A, K.581.  Brahms was entranced by the playing of Richard Mühlfeld, the Duke’s principal clarinetist.  Brahms and Mühlfeld struck a friendship and musical collaboration that led to four splendid chamber works: this Clarinet Quintet, a Trio for clarinet, cello, and piano, and two Sonatas for Clarinet and Piano. Collectively, they constitute a remarkable Indian summer.

The most obvious precedent for Brahms’s Quintet is Mozart’s immortal Quintet. (Weber had also composed a Clarinet Quintet that Brahms certainly knew.) The greatest difference between the Brahms and Mozart works is the manner in which the woodwind instrument interacts with the strings.  Mozart treats the clarinet in a concertante fashion, that is, allocating some measure of soloistic display to clarinet, even though it is technically an equal part of the ensemble. Brahms integrates the clarinet more fully into the texture.  His use of the instrument’s color is extremely subtle.

The Quintet is cyclic, which means that musical material appearing in the first movement is reworked and re-introduced in subsequent movements.  Sometimes this takes place via direct quotation; more often, it occurs after having undergone some transformation that leaves the original idea altered but recognizable.  Brahms’s metamorphosis is nuanced and understated. Undulating sixteenth notes in parallel thirds and sixths that open the work, serving as germinal material for virtually the entire composition.  By structuring the Quintet in this way, Brahms makes all four movements essentially into an extended set of variations. His Finale is the only formal set of variations in the piece, and there merged with aspects of rondo form.

One aspect of the Quintet’s individuality is an ambiguity between B minor, the home tonality, and its relative major, D major. Brahms sets forth this tonal uncertainty in the first measures. It is inherent to the questioning nature of his music, a thoughtful demeanor that serves as another hallmark.  Like other compositions from Brahms’s final years, this is not so much music of gesture and drama.  Its focus is on nuances of instrumental color and motivic development.

The character of the clarinet is, of course, integral to the entire work.  For those lucky enough to be discovering this piece for the first time, just watching and listening to the interaction among the five players is an engrossing experience.  Listeners to whom Op. 115 is an old friend reap a different reward, that of the ever-present freshness and magic that attend great music.