We spoke to renowned baritone Russell Braun about what it’s like to prepare for Strauss vs. Strauss. He shared his excitement to perform once again with Amici… “members of his musical family”. 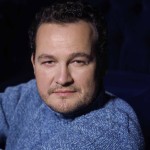 “I really want to say and stress that I’m not coming in to this concert as an outsider, which I do many other places in North America and Europe. It’s very much coming home, and making music with people I consider musical family. I’ve known Serouj for a very very long time, and David Hetherington and Joaquin and we’ve worked on many projects together, so it’s a whole different mindset. I hope that the intimacy of our relationships will translate into the intimacy of the concert.”

Renowned for his luminous voice “capable of the most powerful explosions as well as the gentlest covered notes” (Toronto Star) baritone Russell Braun rightfully claims his place on the concert, opera and recital stages of the world. His intelligent and thoughtful portrayals of Chou En-lai, Billy Budd, Prince Andrei, Figaro, Papageno, Count Almaviva, Don Giovanni, Pelléas, Eugene Onegin, and The Traveller have captivated audiences around the world!

Get ready for next weekend’s performance of Strauss vs. Strauss by watching a video of Russell singing Beethoven’s An Die Ferne Geliebte, Op. 98.

Q: Is there anything different or special about preparing Strauss repertoire?

A: That’s a good question. Strauss sounds are all about the voice and the melody. There are some composers like Hugo Wolf or Mahler, to a certain extent, that you have to dive into the text in a really profound way before you can really understand or work on the song. With Strauss, it’s a little bit the other way around. The melody and what it does for the human voice is really very much in the foreground; it doesn’t mean that the songs are all loud or high but there’s a certain kind of vocal expectation of quality of tone, phrasing and color that is an important first step when you sing a Strauss song. From there you can start to delve into the poetry a bit.

Q: How do you feel about the text? Is it set differently than something like Schubert Lieder?
A: Well, apart from the different time period, Schubert compared to Strauss is really a minimalist. Schubert and the contemporaries of Schubert, which are Beethoven and early Brahms perhaps, they kind of let the singer become the storyteller, and Strauss doesn’t quite let the singer do that. It’s a little bit more “composed.” One can’t really sing a Strauss song without letting go of the reins of Strauss. There is a certain convention for certain Beethoven songs and certain Schubert songs where the singer has quite a bit of freedom to sort of create a storytelling atmosphere, and Strauss is very much in control all the time, which is a good thing because I can hardly think of a composer that was more inspired with melody than Strauss. It’s incredible.

Q: What is your favorite aspect of Strauss repertoire?

A: I think really the lyricism. Two things, the vocal writing is pretty perfect, one has to say. I mean, Strauss was married to a singer, and he absolutely knew how to write for the voice. With Beethoven for example, it’s always a bit of a struggle because his vocal lines are always much more instrumental than certainly Strauss. That’s something that I really look forward to, to let myself be inspired by the beautiful melodic gifts of the composer.

Q: What do you think of Amici’s juxtaposition of works by Johann Strauss and Richard Strauss as a programming concept?

A: Well, it almost kind of a no brainer, I’m surprised it hasn’t been done before! They are really actually contemporaries in a way, I mean [Richard] Strauss is a bit later than Johann Strauss but you know there are many great serious tragic composer to which [Richard] Strauss certainly belongs. Mahler and some of the heavy luminaries of writing really serious music absolutely adored [Johann] Strauss and loved the refinement of the orchestration and the rich gift of melodies. So, it’s not something that composers looked down upon in any kind of way. Just like in France, composers who were contemporaries of Offenbach, for example, who wrote Operettas, really really respected his craft. I guess craft is a good word, that is evident in both Richard Strauss in his lieder and operas and also in the craft of the operettas of Johann Strauss.

Q: Do you have a favorite Johann Strauss waltz, and a Richard Strauss tone poem?
A: [Laughing] Well, umm. I can’t really answer that question. That’s very difficult. I just did a concert in London, and the second half of the program was Ein Heldenleben, The Life of a Hero, and that was pretty exciting but I wouldn’t say it’s my favourite. I don’t really have a favourite.